Often, aria-* attributes can be confusing, and easy to use incorrectly. WebAIM noted that the majority of home pages where ARIA was present, actually resulted in more accessibility issues.

No ARIA is better than incorrectly used ARIA. If you are not sure about an aria-* attribute, then the best place to learn about it is from the documentation.

Accessible Rich Internet Applications or ARIA for short, allows you to give the information to the document which will then describe that information in ways that assistive technologies (or AT for short) can readily read and interpret. ARIA is a supplement to HTML, and should only be used when needed.

This may sound vague at first, but after putting ARIA to use, it becomes very clear what ARIA can and can’t do.

What is aria-label, and how do you use it?

To use aria-label, you will need to give it a value. The value provided (which is always a string), will be picked up by assistive technologies.

Here’s an example of what it would look like in markup: 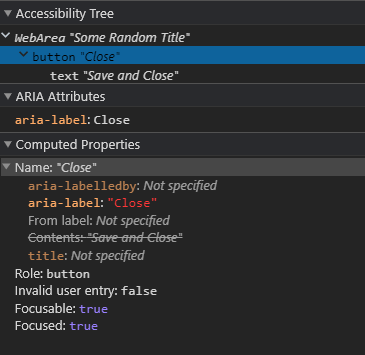 Example 1: An image of the accessibility tree within Chrome DevTools.

In the accessibility tree, the button will add the value provided by the aria-label as the accessible name.

It’s important to note that this will replace the inner text with the aria-label “Hello, world!”, when it’s read by assistive technologies. This is shown in the example above, the “contents” of the button is crossed out, as the aria-label takes precedence.

This could be useful in various situations. For example, let’s say you have a button with an icon within and no text content.

Assistive technologies will not be able to read this button properly as it contains no text content. Meaning that the accessible name would be “button” at best.

If we were to add an aria-label, it would provide adequate text content, as it would add an accessible name to the element.

A screen reader might then read “some icon, button”.

aria-label can be used in other situations as well. For example, adding a unique label to a navigation region:

This will allow a user using AT to distinguish between the two navigation regions.

Example 2: An image of the accessibility tree, showing the current accessible name, which is “Close”.

A user utilizing assistive technology might miss out on that content, as it is replaced by the aria-label, and may think the button does something different than what is actually intended.

An aria-label should always provide equivalent information, to that of which it would provide visually.

What is an aria-labelledby, and how do you use it?

aria-labelledby allows you to provide a label to an element using an ID reference. That ID reference would be from an element which you want to use as a label.

In the example, the button receives the ID of “test1” from the span for the aria-labelledby value. This means that the accessible name for the button would be “Tyler”.

This is because aria-labelledby takes precedence over the inner text content of whichever element it is on. The user would never reach the buttons inner text if they were using assistive technology.

Here’s what it looks like in the accessibility tree: 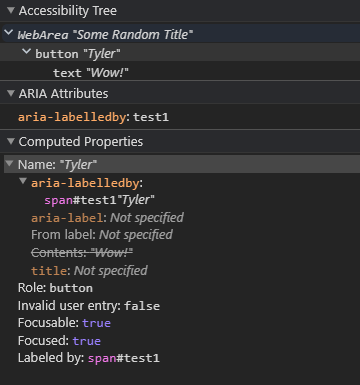 Example 3: An image of the accessibility tree, showing the value received from “aria-labelledby”. That value being “Tyler”.

Another thing to add is that you can add multiple references in an aria-labelledby, each separated by a space.

The above would look like the following, within the accessibility tree: 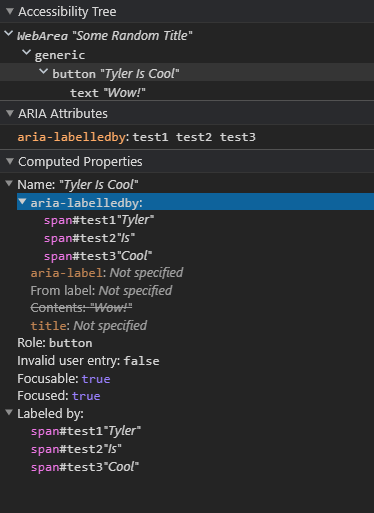 Example 4: An image of the accessibility tree, showing the values provided by the aria-labelledby, using multiple references.

What is aria-describedby, and how do you use it?

This means that this is generally used more when providing a description to an element which tends to be based on a pre-existing element. Unlike aria-labelledby, aria-describedby will not take precedence over the inner text content, it will supplement the text content if there is any.

Assistive technology might read something along the lines of, “It’s all right, Andy! button, It’s just bolognese!”

As with aria-labelledby, you can add multiple references, each separated by a space.

With that, I hope I gave a clear description on each attribute. Though that being said, you should only use these attributes if the situation doesn’t allow for plaintext, or semantic HTML elements.

Here are a few links to topics if you wish to learn more about a11y and ARIA.